The National Transitional Council of Libya (NTC) announced on Friday a two-day truce in the conflict over the war-torn city of Sirte, with the alleged intent of allowing civilians to escape safely. Since then, the NTC violated their self-imposed truce in the worst way possible, namely by shelling the city's main hospital while a team of the International Committee of the Red Cross (ICRC) was visiting.

Citizens fleeing Sirte on Saturday told Reuters they knew nothing of the ceasefire, and that the shelling by NTC forces had not stopped. NATO also continued its attacks on the city throughout the weekend.

The NTC's siege of Sirte started over a month ago, when rebel leaders said that they hoped to "starve into submission" the city, and cut off the city's electricity, water and supplies. Since then, Sirte has also seen daily NATO bombings and heavy artillery shelling by NTC forces. People fleeing Sirte on Sunday said that they had to leave because they were "caught between Nato bombings and shelling by rebels," with NATO "bombing at random and often hitting civilian buildings."

The Telegraph talked to people fleeing the city who said that Nato bombing and more recently, the attacks by the NTC had turned Sirte into a "living hell". An elderly lady shouted: "They are killing our children. Why are they doing this? For what? Life was good before!"

A Pakistani migrant worker who fled Sirte said: "Nato struck one big building, Imarat Tamim, two days ago, with 12 or 13 bombs. [...] The whole building with nearly 600 flats is razed to the ground now." 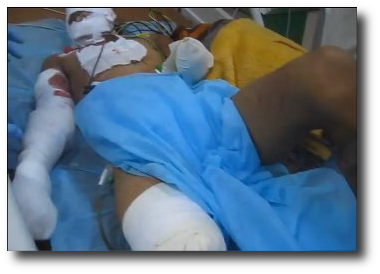 Videos that emerged out of Sirte a week ago show bombed out civilian homes, schools, a radio station, and a big number of casualties, among them many women and children.

The ICRC described the humanitarian situation in Sirte as very critical after they visited the city's main Ibn Sina hospital last weekend. The aid workers reported that the hospital lacks water, electricity, and basic medical supplies. A hospital doctor told Reuters that he saw "a child of 14 die on the operating table because the power went out during the operation."

Moreover, the ICRC reported that the hospital was in fact attacked by the NTC while their team was visiting. Hichem Khadhraoui from the ICRC said that "several rockets landed within the hospital buildings while [they] were there." From the AFP report:

After the ICRC team went in, National Transitional Council fighters launched a ferocious attack with rockets, anti-tank cannons and machine gun fire from a position less than a kilometre from the hospital. Gaddafi loyalists responded with mortar and sniper fire.

"We were surprised" that the attack took place while the Red Cross team was visiting, Mr Khadhraoui said, adding that they had "contacted all parties to say we were going in."

Update: According to the ICRC, the hospital was hit various times by NATO and NTC bombings. Press TV reports on Oct 6 that NATO has carried out a new round of airstrikes against Libya, targeting a hospital in the northern town of Sirte.

At the time, the US and its NATO allies claimed that intervention was required to halt a supposedly imminent massacre of civilians in the eastern city of Benghazi. Since then, the NATO bombings and the civil war fomented by the Western powers have claimed far more lives than were ever threatened by the Gaddafi regime.

Now this resolution is being invoked to justify NATO and the militias it supports carrying out in Sirte precisely the kind of murderous siege against a civilian population that the US and the European imperialist powers pretended to be preventing.

TeleSUR's Diego Marín is in Sirte and reports that the Red Cross confirmed that the city's main hospital was bombed by NATO. He also witnessed how the NTC actively hindered the Red Cross from reaching the city:

CNN has actual footage of the Red Cross convoy being forced by rebel gunfire to turn around: