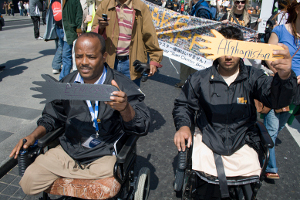 Ban Advocates from Afghanistan and Ethiopia demonstrating outside of the Convention on Cluster Munitions conference in Dublin. image source

On Friday, Human Rights Watch reported that the Libyan army had used cluster bombs in residential areas in the city of Misrata.

Some the of the newspaper articles I read about this story mentioned that there's a treaty between more than a hundred states that have agreed to ban cluster bombs.

Why ban cluster bombs? One reason is that they have a very broad area of effect, often harming civilians in attacks. Another is that they contain up to a hundred bomblets that may fail to explose initially but remain live and explode when handled, thus posing a risk similar to landmines.

98% of 13,306 recorded cluster munitions casualties that are registered with Handicap International are civilians, while 27% are children.

The Convention on Cluster Munitions (CCM) that bans cluster bombs was adopted in 2008. And indeed, over a hundred states have since signed the treaty, though 52 of those still have to ratify. [1]

However, a number of countries have opposed the treaty. These are mostly the same countries that produce and stockpile significant numbers of cluster munition. They include the United States, Israel, Russia, China, India, Pakistan and Brazil. Libya has also not signed the treaty.

In defense of their opposition of the ban, the US said that cluster munitions had a "clear military utility in combat" and that they actually cause less harm to civilians than some other weapons. But that's certainly nonsense. The United Nations estimate that around 40% of cluster bomblets fired by the Israeli Defense Forces in the 2006 Lebanon war failed to explode on impact. [2]

Given that each cluster bomb can contain hundreds of bomblets and be fired in volleys, even a small failure rate can lead each strike to leave behind hundreds or thousands of [unexploded ordnances] scattered randomly across the strike area. For example, after the 2006 Israel-Lebanon conflict, UN experts have estimated that as many as one million unexploded bomblets may contaminate the hundreds of cluster munition strike sites in Lebanon.

It's also estimated that, today, around 300 Vietnamese die annually from exploding bomblet duds that date back to the Vietnam war (1955-1975).

The United States do not only decide to continue producing deadly cluster bombs which are exported to many countries in the world. They also continue to use them themselves, as recently as 2006 in Iraq. stopclustermunitions.org has four maps that detail affected countries (36), users of cluster bombs (15), producers (34), and stockpilers of cluster munitions (85).

The four most common users of cluster bombs counted by the number of wars they used them in are:

As you can see, the US and UK are among the biggest users of these horrible weapons. Yet these same countries are at the forefront of those accusing Libya of atrocities against civilians, and demanding its leader Muammar Gaddafi to step down. And the recent Human Rights Watch about the alleged use of cluster bombs by the Libyan army in Misrata report supports these accusations.

A former head of the UK's armed forces, Lord Dannatt, was quoted yesterday with regard to the cluster bomb finding:

If we thought that Gaddafi had lost the moral right to rule this country a month ago, he has lost it in the last 24 hours, that's for sure.

Following his logic, the UK government has long lost its 'moral right' to rule. Or maybe what Dannatt means is it that it's morally acceptable when it's the British military that drops cluster bombs on Arab civilian areas.

There isn't, however, much evidence to this cluster bombs story. Since the beginning of the protests, the mainstream media has been constantly pumping out similar accusations, and many of these already turned out to be false. John Pilger notes in his article from 6th April:

Statements by western officials and media that a "deranged and criminal Colonel Gaddafi" is planning "genocide" against his own people still await evidence.

Libyan government spokesman Moussa Ibrahim strongly denied the use of cluster bombs: "Absolutely no. We can't do this. Morally, legally, we can't do this." He continued to say that "the evidence would remain for days and weeks, and we know the international community is coming en masse to our country soon". [3]

A few days before the cluster bomb incident, the Libyan authorities invited a Red Cross team to Misrata to assess the situation. Also, Libya has asked for a UN fact finding mission in the past, which has now started since about a week. [4]

There is similarities here with the lead-up to the US-led invasion of Iraq in 2003.

Before the war in Iraq, a UN fact finding mission led by Hans Blix went to Iraq to find if there was indeed any "weapons of mass destruction" (WMD), the threat of which were used by the US and UK as a justification for their invasion.

Blix and his team praised a "proactive" Iraqi cooperation, yet they did not find any WMD, until they were quickly shut out of Iraq by the US when the war started. [5] [6]

Evidence is now in that President Barack Obama grossly exaggerated the humanitarian threat to justify military action in Libya. The president claimed that intervention was necessary to prevent a "bloodbath" in Benghazi, Libya’s second-largest city and last rebel stronghold.

But Human Rights Watch has released data on Misurata, the next-biggest city in Libya and scene of protracted fighting, revealing that Moammar Khadafy is not deliberately massacring civilians but rather narrowly targeting the armed rebels who fight against his government.

An independent group called the "British Civilians for Peace in Libya" that visited Western Libya for a week on a fact finding mission, comes to a similar conclusion. In their interim report they say they "are concerned that western media outlets are failing in their duty to report on the conflict truthfully." [9] See the Sky News article from April 19, 2011.